With his first exhibition at Az W on the “Rural Studio” in 2003, he brought an architectural engagement with radical approaches of low-tech and low-cost into the spotlight, thus initiating an international rethinking – especially in academic, media and theoretical circles. Az W achieved a similar result with an exhibition on the hitherto unknown “Soviet Modernism”, which was to be followed years later by a great hype surrounding brutalist architecture. Other ground-breaking exhibitions under his directorship include “Vienna. The Pearl of the Reich. Planning for Hitler”, which for the first time reappraised the construction and planning activity in Vienna during the Nazi era. “The Austrian Phenomenon” and “Lessons from Bernard Rudofsky” were devoted to the international reception of Austria’s architectural heritage, while projects such as “Chinaproduction” and “Balkanology” made visible the connections between global capital flows and local contexts.

Dietmar Steiner, born in Wels in 1951, studied architecture at the Academy of Fine Arts (first with Ernst A. Plischke, then with Gustav Peichl). He collaborated on Friedrich Achleitner’s archive “Austrian Architecture in the 20th Century”, taught at the University of Applied Arts until 1989 and served as Secretary General of the Austrian Society of Architecture (1980-82). He also worked as an editor for the international magazine “domus”. In 2002, as commissioner, he curated the Austrian contribution to the Architecture Biennale in Venice. From 2006 to 2014 he was president of ICAM. From 2009 to 2014 he was chairman of the Quality Advisory Board for Social Housing in Vienna. Since 1989 he ran his own office for architectural consulting in Vienna. His lifelong work at the interface of theory and practice and his broad range of content predestined him for the role of mediator. Whether between clients/investors and architects, between politics and building culture, between laymen and experts, he was always concerned with addressing backgrounds and interests, shifting framework conditions and thus ensuring the highest possible quality, especially for the users of architecture.

Before becoming ICAM President, Dietmar was our Treasurer, as well as providing the support of Az W to host our website and edit our journal, ICAMPrint. As President, he valued collections and research on an equal footing with education and public programmes, something greatly valued by the wide diversity of ICAM member institutions. The membership grew in its geographic breadth under his leadership; he welcomed new ideas and new members in an open and collaborative spirit. His many contributions at ICAM conferences sparked heated debates which, in retrospect, were remarkably forward-looking. His passion for and advocacy of architecture museums, as well as his critical observations and reflections are preserved in our conference proceedings and in ICAMPrint.

Succeeding Dietmar as ICAM President was a daunting prospect, mitigated by the generosity of his support and the sharing of his knowledge and experience. ICAM will forever remember Dietmar as a brilliant critical thinker, a phenomenally well-connected leader, a passionate advocate for architecture, and as a warm, witty and supportive colleague and friend. Dietmar was a crucial actor in ICAM’s history and will be dearly missed.

Our sympathy goes to his wife Margarethe Cufer and to all his close colleagues at Az W and across the world of architecture. 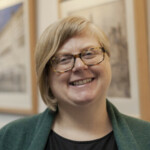