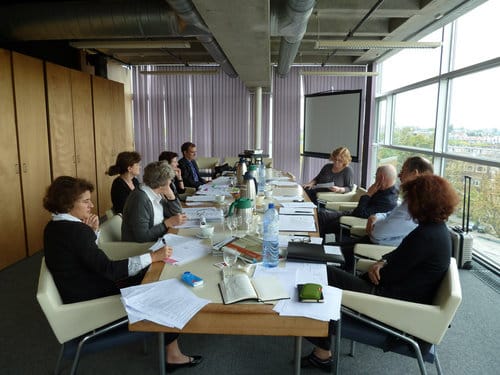 In September 2019, at its twenty-fifth general assembly, the International Council ofMuseums(ICOM) put forward an alternative definition of museums as“democratizing, inclusive and polyphonic spaces for critical dialogue aboutthe pasts and the futures” whose goal is to contribute to “human dignity andsocial justice, global equality and planetary wellbeing.” This description wasmeant to revise the organization’s current definition, last updated in 2007,which states that a museum is a “non-profit, permanent institution in theservice of society” that fulfills its mission by acquiring, conserving,researching, communicating, and exhibiting.After a long and divisive debate, the general assembly decided to postpone the vote.What was a worthwhile definition to some was too political for others, and didn’treadily address the traditional functionsof a museum. However, amid all thecontroversy surrounding the new definition and the process that led to itsformulation, the vote has brought new attention to the debate around the roleof museums within our rapidly evolving social and political landscapes. Asdigital tools and social media transform relationshipswith the public andgenerate mechanisms for real-time feedback, museums are being called to account.They’re also being asked to become more responsive to change and more transparent in their thinking and processes—to make themselves activeparticipants in the radical transformations that are happening within and aroundthem.In response to these concerns, Anne Pasternak, director and Barbara Vogelstein,chair of the board of trustees at the Brooklyn Museum, wrote an open letterentitled“A Call for Cultural Courage.” She noted, “At this time of social unrest, people aroundthe globe are using protest to call upon their museums to do better” by“understanding that the stories we tell matter,” byshining a spotlight on “culturalhistories that have long beensuppressed,” by “challenging the historical insularity ofmuseums,” and by making them “accessible to all.” For Pasternak, the future ofmuseums is full of possibility and potential and “can amend history.”This panel invitescase studies that address andgive examples of programs,exhibitions, research, collecting strategies, and approaches to archiving architectureand design within museums/ arts organizations that engage meaningfully withissues of access, equity, and inclusion; that offer alternative narratives andperspectives; that open up conversations and networks; and are broadening theconversation and scholarship, challenging histories, and ultimately questioning andreconsidering the status quo, especially in relation to architecture and design asideological tools that have the potential to shape and expand understandings of theworld.Abstracts should be sent tosession chair: Zoe Ryan, Chicago Art Institutezryan@artic.eduPlease also copy toRebecca Bailey Rebecca.bailey@hes.scot