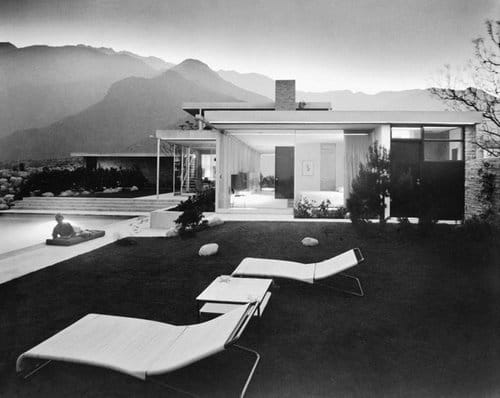 Los Angeles—A new exhibition will offer highlights of the recently acquired archive of Julius Shulman, the internationally renowned photographer whose iconic images helped to define modern architecture. Julius Shulman, Modernity and the Metropolis, at the Getty Center, October 11, 2005–January 22, 2006, pays tribute to Shulman on his 95th birthday, celebrating a long career of achievement.

Los Angeles—A new exhibition will offer highlights of the recently acquired archive of Julius Shulman, the internationally renowned photographer whose iconic images helped to define modern architecture. Julius Shulman, Modernity and the Metropolis, at the Getty Center, October 11, 2005–January 22, 2006, pays tribute to Shulman on his 95th birthday, celebrating a long career of achievement. It also marks the official transfer of Shulman’s historic archive to the Special Collections of the Research Library at the Getty Research Institute. With the Julius Shulman archive, the Getty becomes one of the most important centers for the study of 20th-century architecture through the medium of photography.
On view in the exhibition galleries at the Getty Research Institute, Julius Shulman, Modernity and the Metropolis, will feature 83 of the finest images selected from the archive, presenting Shulman’s work in four sections. “Framing the California Lifestyle” and “Promoting the Power of Modern Architecture” display works that capture the evolution of modern architecture. Included are photographs commissioned by visionaries such as Richard Neutra, Rudolph Schindler, and John Lautner, as well as selections from Shulman’s extensive portfolio of 18 of the 26 California Case Study Houses for John Entenza’s Arts & Architecture magazine.  “Development of a Metropolis” features Shulman’s photographs of 20th-century Los Angeles, including his lesser-known images of gas stations, movie palaces, and bustling markets, that reveal the dynamism and attitude of a region struggling to  define itself.  “The Tools of an Innovator” presents a self-portrait of Shulman through his photography equipment.

The Julius Shulman archive contains over 260,000 color and black-and-white negatives, prints, and transparencies that document over half a century of American architecture. The archive dates back to the mid-1930s when Shulman began his distinguished career, and includes photographs of celebrated homes by modern architecture’s top practitioners, such as Richard Neutra, Frank Lloyd Wright, Raphael Soriano, Rudolph Schindler, Charles and Ray Eames, Gregory Ain, John Lautner, and A. Quincy Jones. Shulman’s body of work maps the development of the post-war Modernist movement that was burgeoning on his doorstep, providing a seminal document of the architectural and urban history of Southern California during the second half of the 20th century. The Getty’s unprecedented access to Shulman’s entire collection will allow the broader historical relevance of all his photographs to be examined for the first time.

The Julius Shulman archive greatly enhances the GRI’s holdings of architecture-related works in its Research Library, which contains one of the world’s largest collections devoted to art and architecture. In addition to the Shulman archive, the Research Library’s Special Collections also hold Lucien Hervé’s photography of Le Corbusier’s architecture and an important research collection of photographs and microfilms of Frank Lloyd Wright’s drawing and letter archive. Getty experts have catalogued the vast Shulman archive, making its contents accessible to scholars and researchers. The archive’s materials have been cleaned, negatives and prints have been re-housed, and an online finding-aid is being created. This ensures the longevity of this important collection and its continued usefulness to students, scholars, and researchers interested in art, architecture, urban design, photography and popular culture.
Along with Ezra Stoller in New York and the Hedrich-Blessing firm in Chicago, Shulman is part of a triumvirate of renowned architectural photographers that documented American architecture from the 1940s until the early 1990s. Because of  his intuitive, yet precise timing and brilliant eye for composition, Shulman was trusted by the leading architects of the day to represent their built works of art in print.

A long-time resident of Southern California, Shulman encountered his first architectural subject, Richard Neutra’s Kun house in the Hollywood Hills, through an acquaintance. His photographs of the house were passed along to Neutra, who was so impressed that he hired Shulman to document all his buildings from that moment on.  The partnership was beneficial to both men. Shulman’s career as an architectural photographer took off thanks to Neutra’s introductions to the major architects of the region; and 35 years after his death, Neutra’s work continues to be promoted worldwide through Shulman’s extensively published photographs.

Although officially retired, Shulman continues to take photographs professionally as well as lecture and consult. He lives in the Hollywood Hills in a house and studio designed for him by Raphael Soriano in the 1950s. Shulman is represented by the Craig Krull Gallery in Santa Monica.

Visiting the Getty Center:
The Getty Center is open Tuesday through Thursday and Sunday from 10 a.m. to 6 p.m., and Friday and Saturday from 10 a.m. to 9 p.m. It is closed Mondays and major holidays. Admission to the Getty Center is always free.  Parking is $7; no reservation required. Reservations are required for event seating and groups of 15 or more. Please call 310-440-7300 (English or Spanish) for reservations and information. The TTY line for callers who are deaf or hearing impaired is 310-440-7305.