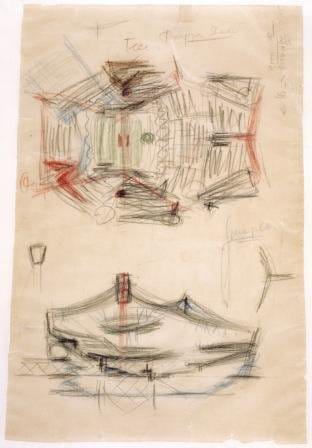 Eva-Maria Barkhofen has been the ICAM Germany spokesperson since 1999, and was unanimously re-elected at the general meeting held at the Institut für Regionalentwicklung und Strukturplanung in Erkner, Germany, in 2006.
Deputies: Dr. Wolfgang Voigt, Deutsches-Architektur-Museum Frankfurt/M and Prof. Dr. Annemarie Jaeggi, Bauhaus-Archiv Berlin.

Eva-Maria Barkhofen came from her post as head of the Berlinische Galerie architecture collection to run the architecture archives at the Akademie der Künste.
Akademie der Künste, Baukunstarchiv
The Akademie der Künste, founded in the 17th century, is one of the oldest facilities in Germany with in-house archives. The Baukunstarchiv (lit. ‘archives of the art of building’) was founded in 1954 by the first postwar president of the Akademie, Hans Schaon. The archives contain documentation of the development of architecture since 1900, covering Expressionism, Classical Modernism and the postwar period, and increasingly the period following the reunification of Germany in 1989 – also covering major estates, such as those of Hans Scharoun, Bruno and Max Taut, the Luckhardt brothers, Martin Mächler, Hugo Häring, Werner Düttmann, Hermann Henselmann or the architecture critic Julius Posener. The most recent acquisition, the personal archives of Adolf Behne, is also among archival records from the most famous German architects, civil engineers and landscape designers alive today.