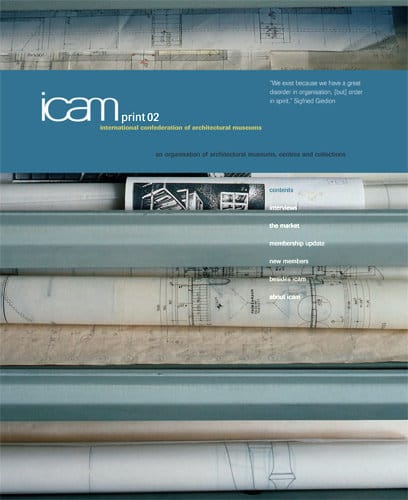 The focus of this issue of icamprint is on the ‘market’ for private archives. After all, collecting and managing the documentation of architecture history to conform to academic and scientific standards is a complex business, and a core task for most icam members. In this context, whether or not the ‘originals’ by star architects have an artistic value on the market is only superficially a decisive issue.

Please visit also the detailed page: editorial
Architecture has become a lifestyle issue and is more topical than ever today. Art museums are holding major architecture exhibitions and the names of high-profile architects are familiar to a broad public. One might have thought that this would make the tasks of the members of icam somewhat easier having done the continuous groundwork, collecting, organising presentations, discussions and publications. This work has not only led to an increased level of awareness of architecture but also to an increase in its value on the open market. The archives and drawings of the blockbuster architects are increasingly becoming profit-orientated and sold to the highest bidder. Even the icam conference has itself become a marketplace — with a potential buyer for the archigram archives’ being sought in Athens.

Are architects’ estates really a profitable commodity? This question is addressed on several pages in the following issue. The Netherlands Architecture Institute (NAI) was the only one of the institutions contacted that was to prepared to provide an outline of its acquisition policy. My particular thanks are due here to Mariet Willinge. The contribution by Charles Hind provides an insight into the establishment and development of the architecture market. The interviews by Wim de Wit with the architecture specialist appraiser Wilbert Hasbrouk, and by Ulrike Jehle-Schulte Strathaus with Alexander von Vegesack of Vitra address the topic from a different perspective, showing that, in the final analysis, the museum world has much more to offer than the market — which, as we know, is notoriously fickle.

icamprint 2 opens with the two interviews with the former and present icam presidents Michael Snodin (from 1998 to 2006) and Dietmar Steiner (from 2006). Both look both back and at the future of the confederation, which is celebrating its 50th year in 2009 — another incentive to revisit the Finnish Museum of Architecture, one of the founding members of icam and host to the first icam conference, which was held in Helsinki. The long-awaited report on the opening of the cité de l’architecture et du patrimoine and its permanent exhibition has arrived from Paris, followed by profiles of three new icam members. I would like to draw particular attention to the next conference, which is to be held in Oslo. Ulf Gronvold has compiled an interesting agenda, even providing members of icam with an opportunity to visit the royal palace. The five sessions at icam14 are on ‘Collecting Architecture’, ‘Architectural Museums and Architectural Education’, ‘Travelling Exhibitions’, ‘Architectural Publishing’ and ‘Selection: Between ideal and reality’. They address core areas of interest for icam members and are bound to meet with considerable interest.

Finally, I should like to express my thanks to the authors who have contributed to the success of this issue, as well as for the support provided by the editorial board: Ulf Gronvold, Ulrike Jehle-Schulte Strathaus and Dietmar Steiner.
Monika Platzer, editor icamprint