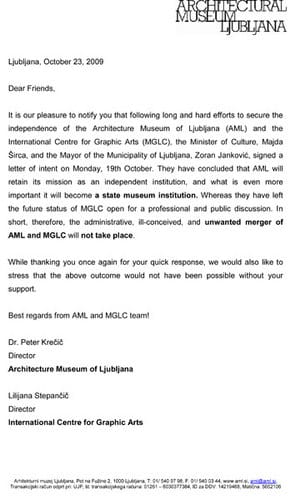 It is our pleasure to notify you that following long and hard efforts to secure the independence of the Architecture Museum of Ljubljana (AML) and the International Centre for Graphic Arts (MGLC), the Minister of Culture, Majda Širca, and the Mayor of the Municipality ofLjubljana, Zoran Janković, signed a letter of intent on Monday, 19th October. They have concluded that AML will retain its mission as an independent institution and become part of the system of state museum institutions, whereas they have left the future status of MGLC open.

The financier and the founder are considering whether to merge MGLC with the Museum of Modern Art, the National Gallery, the Museum and Galleries of the City of Ljubljana, or to retain the current status of MGLC. They have stressed that they will make a decision on the future status of MGLC on the basis of a public expert debate. In short, therefore, the administrative, ill-conceived, and unwanted merger of AML and MGLC will not take place.

While thanking you once again for your quick response, we would also like to stress that the above outcome would not have been possible without your support.

Best regards from AML and MGLC,