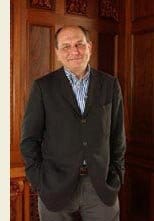 The Canadian Centre for Architecture announced today the appointment of Mr. Mirko Zardini, an internationally known practicing architect, professor of architecture and prolific architectural author and editor, to the position of director of the CCA. Phyllis Lambert, Founding Director and Chair of the Board of Trustees of the CCA, who assumed the directorship on an interim basis while the Centre sought to fill the position, will continue as Chair of the Board. Mr. Zardini will assume his new position on 1 November 2005.

The Canadian Centre for Architecture announced today the appointment of Mr. Mirko Zardini, an internationally known practicing architect, professor of architecture and prolific architectural author and editor, to the position of director of the CCA. Phyllis Lambert, Founding Director and Chair of the Board of Trustees of the CCA, who assumed the directorship on an interim basis while the Centre sought to fill the position, will continue as Chair of the Board. Mr. Zardini will assume his new position on 1 November 2005.

“Mirko Zardini’s appointment as the new director of the CCA brings to an end an international search that began last spring,” stated Phyllis Lambert. “The unique nature of the CCA and the international scope of its objectives and audiences match the talents and accomplishments that Mr. Zardini brings to his new role. A practicing architect who has also undertaken truly inventive research, he has taught and written extensively about the field; between 1983 and 1999 he served as editor of Casabella and Lotus International, and published a series of seminal publications demonstrating his unique way of seeing architecture – writ large – from urbanism to culture in both the art and science of the field. Most notable are the remarkable exhibitions he has conceived and realized.

“Over the course of the past two years, Mr. Zardini has worked within the CCA to develop exhibitions and programs that reflect a new vision of our mission, sparking new insight and debate and extending our compass to promote and support research and public interest in architecture and urbanism. He has shown himself to be a perceptive and creative thinker as well as a formidable leader.

“As he has moved with us through an ongoing period of transformation, he has come to know the institution’s strengths and capacities, and has amply proven his ability to guide the CCA into the future,” she concluded.

“The influence of the Canadian Centre for Architecture extends throughout the architectural world, and it is truly an honour for me to become its new director,” said Mirko Zardini. “I look forward to creating synergies within the CCA between the division responsible for collections and the division responsible for reaching out to the public through exhibitions and other programs. Likewise, I will be working to cultivate new partnerships and collaborations with institutions around the world who share our mission to advance thought and debate about the art of architecture.

“I also intend to turn more attention to the CCA’s engagement with contemporary architecture, for example, opening up the study centre to practicing architects.

“Funding will also become a major priority, as the CCA can only continue to exercise its international leadership by varying and increasing its sources of funding from both the private and public sectors. We will actively be seeking an additional sum of around $25 million to augment our endowment fund from both private and public sources over the next five years.

“I look forward to working together with Phyllis Lambert, the Board of Trustees, and the entire staff of the CCA to realize these and other objectives,” Mr. Zardini said.

Mr. Zardini’s Career
Mirko Zardini is an architect whose research, writings, and design projects engage the transformations of contemporary architecture and its relationship with the city and landscape. Editor of Casabella magazine from 1983 to 1988 and Lotus international from 1988 to 1999, Mr Zardini also served on the editorial board of Domus.

His publications include Annähernd perfekte Peripherie (An almost perfect periphery) (Basel, Boston and Berlin, 2001), Back from the Burbs (Lausanne, 2000), Paesaggi ibridi: Highway, Multiplicity (2000), The Dense-City: After the Sprawl (Milan, 1999), Paesaggi ibridi: Un viaggio nella città contemporanea (Milan, 1996), and Frank O. Gehry: America as Context (Milan, 1994). Many of Zardini’s writings result from his research on the urban fabric and context of Zurich, where he proposed a new reading of the periphery.

Mr. Zardini’s writings have also appeared in journals, including Lotus International, Casabella, ANY, Archis, and El Croquis. His architectural works have been presented in several exhibitions such as Il Centro Altrove at the Milan Triennale in 1995, and Parking Plus Picturesque at the École polytechnique fédérale de Lausanne in 2000.

He recently won the competition for Piazza Montefeltro at Forli (Italy), as well as the international competition for the Giardini di Porta Nuova in Milan, with Petra Blaisse (Inside Outside), Michael Maltzan, Irma Boom, Piet Oudolf, and Rob Kustler.

Mr. Zardini’s most recent book, Asphalt (Milan, 2003), is the result of in-depth research on the character of the contemporary city for a series of exhibitions, of which Asphalt (Milan Triennale, Spring 2003) was the first. He conceived the innovative exhibition entitled Out of the Box: Price, Rossi, Stirling + Matta-Clark for the CCA in 2004, an initial look at four major archives recently acquired by the CCA.

Born in Verona, Italy, in 1955, Mr. Zardini received his degree in Architecture from the Istituto Universitario di Architettura di Venezia in 1980. He speaks English, French, and Italian.

The Canadian Centre for Architecture is an international research centre and museum founded on the conviction that architecture is a public concern. Based on its extensive collections, CCA is a leading voice in advancing knowledge, promoting public understanding, and widening thought and debate on the art of architecture, its history, theory, practice, and role in society today.