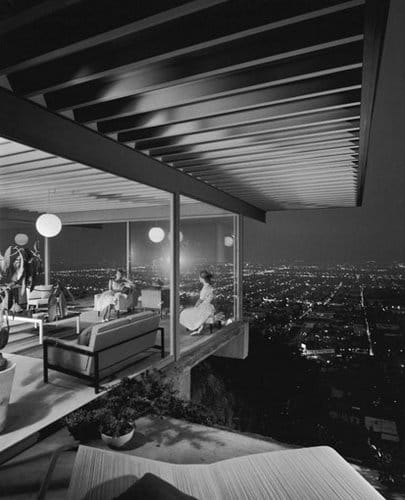 The Julius Shulman archive contains over 260,000 color and black-and-white negatives, prints, and transparencies that date back to the mid-1930s when Shulman began his distinguished career that spanned more than six decades. It includes photographs of celebrated monuments by modern architecture’s top practitioners, such as Richard Neutra, Frank Lloyd Wright, Raphael Soriano, Rudolph Schindler, Charles and Ray Eames, Gregory Ain, John Lautner, A. Quincy Jones, Mies van der Rohe, and Oscar Niemeyer, as well as images of gas stations, shopping malls, storefronts, and apartment buildings. Shulman’s body of work provides a seminal document of the architectural and urban history of Southern California, as well as modernism throughout the United States and internationally. The Getty is planning an exhibition of Shulman’s work to coincide with the photographer’s 95th birthday, which he will celebrate on October 10, 2005.

The Shulman photography archive will greatly enhance the Getty Research Institute’s holdings of architecture-related works in its Research Library, which contains one of the world’s largest collections devoted to art and architecture. In addition to Lucien Hervé’s photography of Le Corbusier’s architecture, the Research Library’s special collections already include an important research collection of photographs and microfilms of Frank Lloyd Wright’s drawing and letter archive. According to Thomas Crow, Director of the Getty Research Institute, “The addition of Julius Shulman’s extraordinary body of work will make the Getty more than ever an essential resource for researchers and historians interested in art, architecture and urban design.”

Shulman is part of a triumvirate of renowned architectural photographers—along with Ezra Stoller in New York and the Hedrich-Blessing firm in Chicago—that documented most of American architecture from the 1940s until the early 1990s. A long-time resident of Southern California, Shulman mapped the development of the post-war Modernist movement that was burgeoning on his doorstep. Among his most famous photographs are those of the Kaufmann house in Palm Springs by Richard Neutra (1947), the interior of the Charles and Ray Eames House in Pacific Palisades (1950), and the Case Study House #22 in Los Angeles by Pierre Koenig (1960). These and other pictures by Shulman have been reproduced countless times, becoming part of the canon of modern architecture. Shulman’s body of work also includes numerous photographs taken around the world.

Shulman became interested in architectural photography in the mid-1930s when an acquaintance showed him Richard Neutra’s latest work, the Kun house in the Hollywood Hills. Shulman’s photographs of the house were passed along to Neutra, who was so impressed that he hired Shulman to document all his buildings from that moment on. The partnership benefited both of them: Shulman gained unprecedented access to Neutra’s buildings and was introduced to all the major architects in the region, enabling Shulman’s career as an architectural photographer to take off; and Neutra’s work became well-known worldwide through numerous publications and continues to be remembered today through Shulman’s photographs, even though some of the buildings no longer exist.
The relationship between architect and photographer is a delicate one. Architects must find someone who not only understands their design philosophy, but is also able to represent a building in a manner that corresponds to their aesthetic sensibility. To Neutra and other architects, Shulman possessed that quality. He was known for his sense of space and his ability to capture a building at the right time of
day in just one exposure. Shulman’s close collaboration with Neutra parallels another relationship forged between Lucien Hervé and Le Corbusier. Neutra trusted Shulman’s eye and architectural insight, as Le Corbusier had confidence in Hervé’s skill with the camera. The result is that both Shulman and Hervé produced works that blend two art forms: photography and architecture.

The Shulman archive also contains photographs of buildings by architects such as Paul Laszló and Paul Williams, who are not as well known outside the Los Angeles context, as well as buildings whose architects have been forgotten but which nonetheless offer tremendous insights into the development of the built environment in Southern California.
Although officially retired, Shulman continues to take photographs professionally as well as lecture and consult. He lives in the Hollywood Hills in a landmark house and studio designed for him by Raphael Soriano in the 1950s. Shulman is represented by the Craig Krull Gallery in Santa Monica.

Visiting the Getty Center:
The Getty Center is open Tuesday through Thursday and Sunday from 10 a.m. to 6 p.m., and Friday and Saturday from 10 a.m. to 9 p.m. It is closed Mondays and major holidays. Admission to the Getty Center is always free. Parking is $7; no reservation required. Reservations are required for event seating and groups of 15 or more. Please call 310-440-7300 (English or Spanish) for reservations and information. The TTY line for callers who are deaf or hearing impaired is 310-440-7305.