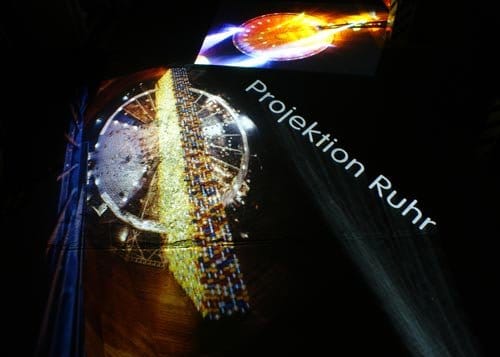 An Exhibition from the M:AI Museum of Architecture and Engineering NRW in the Cité de l’architecture et du patrimoine in Paris from November 19th, 2008 until February 8th, 2009

An Exhibition from the M:AI Museum of Architecture and Engineering NRW in the Cité de l’architecture et du patrimoine in Paris from November 19th, 2008 until February 8th, 2009

The exhibition by the M:AI Museum of Architecture and Engineering NRW in the Cité de l’architecture et du patrimoine in Paris depicts the metamorphoses of a former industrial region known as the Ruhr Area. In a light installation, it portrays the processes that were initiated in the region by IBA Emscher Park and that continue to this day.
Art and artistic interventions played a central role in the transformation between Ruhr and Emscher and have contributed decisively to a new identification with the region. Therefore, the internationally renowned conceptual artist, Mischa Kuball, who works in North Rhine-Westphalia, was invited to reflect upon the transformation of the Ruhr Area by means of an artistic installation. Among other feats, Mischa Kimball created the Light Ellipse around the Advanced Training Academy Mont-Cenis in Herne, a collaborative project of the French architecture firm Jourda & Perraudin and “Yellow Marker”.

Projection Ruhr
Mischa Kuball will project upon the floor of the narrow, slightly curved exhibition room in the Cité a “carpet” that exists of images, sections of images and film sequences: images that tell the history of the Ruhr Area’s transformation, images that define the identity of the region. The motif of the carpet reflects the enormous surface area of the planned grounds of IBA Emscher Park. The grounds stretch 70 kilometres along the east-west axis and span a width of around 15 kilometres, encompassing 17 cities.
A sound installation, composed specially for the exhibition by Thomas Klein and inspired by the particular noises of the region, will add depth to the visual effect.

Mischa Kuball’s artistic approach provides emotional and atmospheric access to the theme. The cones of light initially create a multicoloured atmosphere of light. The light becomes the dominant character of the exhibition. The visitor is invited to place himself into the exhibition in which he moves on and in this carpet of light. The movements of the images and the purposefully directed “noises” will influence his view as well as his progress in the “current of light”. His initial experience is one in which the individual impressions, at first glance, are unable to completely register or to be differentiated because the images in the light cone projections appear obscured by colour, distortion and overlap. The refractions lead to an irritation that becomes more intense by means of the multi-sensual experience. These surprises will encourage the visitor to look, to engage with the images, and then to understand. As so, he draws nearer, unaware at first, to the sensual level of the intellectually provocative content and finally to the overriding theme: the metamorphosis of an entire region.

The project as a whole broaches six leitmotifs: Ruhr Area, built environment, industrial culture, industrial nature, art, and design culture. These are the important themes of IBA Emscher Park that have guided the transformation process. The leitmotifs are enhanced through statements composed by personalities who initiated and coined the “Change without Growth” of the Ruhr Area. For the people in the region between Ruhr and Emscher, this means change, disruption, upheaval, loss, identification, home, communication and internationality. These terms are woven throughout the projections and are intended to clarify the higher-level interrelations. Experiences of all transformation processes are singular. The visitor may pursue his own associations as well as draw a connection to the conversion process being discussed in Paris concerning the Parisian metropolitan area.

Communicators and Website
“Communicators” will be on hand at the exhibition to accompany the visitor, answer questions and provide information on IBA Emscher Park and the Ruhr Area. The irritation of the visitor, intended as part of the artistic installation, will be used to strike up a conversation with the visitors. The IBA was a planning instrument at which dialog with the people played an important role. This aspect will once again become alive through the communicators.

A website (www.projektion-ruhr.com) will be created containing facts and information on the history of International Building Exhibitions (IBA), and of IBA Emscher Park in particular, as well as a description of the most important projects at IBA Emscher Park. This website will be made available to visitors of the exhibition. In addition, there will be a small library with diverse reading materials on the theme.