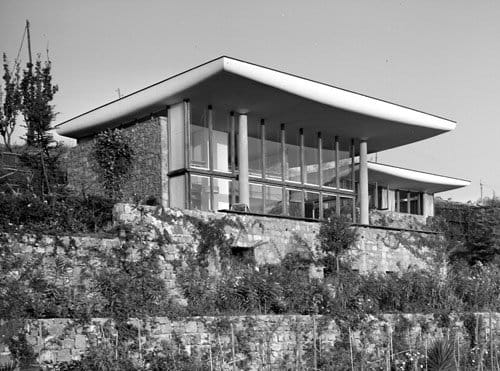 Bruno Morassutti (1920-2008), after his graduation from Venice (1946), completed his training with one year at  F.L. Wright’s studio-commune in Taliesin and went on to affirm himself professionally when he opened a studio in Milan in the 1950s. There followed a long and diverse professional activity, characterised by an inexhaustible spirit of experimentation and research upon the themes of prefabrication and of building modules and components. Morassutti worked until 1962 with Angelo Mangiarotti, then with the architects Memoli, Gussoni and Favini, spanning architectural programmes to urban planning and design.

Among his works: the project for a cylindrical skyscraper for offices in the harbour of Genoa (1955), the holiday apartments in San Martino di Castrozza, Trento (1957 and 1964-65),  the Mater Misericordiae Church in Baranzate, Milan (1957), the apartment building in Via Quadronno, Milan (1959-60), the ‘house without walls’ in Termini Sorrento, Naples (1963-64), the IBM training centre in Novedrate, Como (1970-74)  and the 1963 Domosich structural engineering award for research on prefabricated housing for 315 dwellings (with Enzo Mari).

Particularly noteworthy are the works realised in the Veneto region: in Padua (industrial, residential and university buildings), in Longarone as well as Belluno.  The archive, bequeathed to Archivio Progetti by the architect himself and with the express wishes of his wife and sons, document Morassutti’s professional life from 1950 onward.  It comprises drawings, models, documents, photographs and a collection of journals and articles which chronicle the development of the architect.

The documentation has recently been transferred to Archivio Progetti where it will shortly undergo a necessary archival arrangement, inventory and cataloguing process before being ready for consultation by researchers and made available to the public.